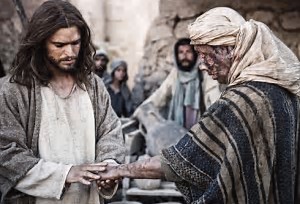 Mark the Gospel writer shares a story about Jesus’ interaction with a leper that caused him to respond with compassion.

Mark 1:40-42 says, A man with leprosy came to him and begged him on his knees, “If you are willing, you can make me clean.”  Filled with compassion, Jesus reached out his hand and touched the man.  “I am willing,” he said. “Be clean!”  Immediately the leprosy left him and he was cured.

Imagine walking around every day yelling the words “unclean!”  According to Old Testament Law a leper was supposed to give this verbal warning so people would stay far away, not coming close enough to touch them.

Have you ever noticed the surprising word order in this passage?  Jesus first was filled with compassion and then he reaches out to touch this man, before he heals him!  The disciples’ jaws must have been on the ground!  Ever since they were little boys, their parents had warned them to stay away from lepers.  Jesus, the divine Son of God, could have healed this guy from a distance with a simple word, but shockingly he decides to touch him first.

It took a personal experience in Africa to help me realize why Jesus probably did it this way.  In January of 1984, at the beginning of our missionary career, my wife and I lived for five weeks in a small Congolese village in the middle of the Ituri forest.  We lived with a Congolese family with no other Westerners around in order to get a good start on language and culture learning.

It was during this immersion experience we received insight into the deep suffering of lepers.  One day the village pastor asked us if we wanted to go visit the leper colony.  I had no clue one even existed and the question made me feel like I had just been transported back to the first century.  When I asked about the location, the pastor explained that the lepers were not allowed to live with the people in the village and that the colony was a couple of miles away.  We went with the pastor to visit the small group of lepers and that was when I realized their deepest problem—loneliness!

These people were outcasts from society.  They were not just living on the margins they had to live apart from others.  I believe Jesus reached out his hand to touch this man because as bad a leprosy was, he knew this man’s deepest need was human touch.  This man was dying of loneliness!

There are a lot of lonely people in the world.  And loneliness is not always connected to the proximity of people.  You can be lonely in the middle of a crowd.  Loneliness has to do with lack of intimacy and friendship.  One of the great paradoxes of our day is having more technological ability to connect with others (through cell phones, email, Facebook, Instagram, texting, etc.) than ever before, but our society is lonelier than ever.  We are high tech, but low touch!  Jesus is showing us how to touch.

Reflections:  Marginalized and lonely people are all around us every day.  Ask the Lord to help you notice them and give you a heart of compassion for them.  Ask the Lord to show you if there is something you can do or say to express that compassion.

When he saw the crowds, he had compassion on them, because they were harassed and helpless, like sheep without a shepherd.

One thought on “Dying of Loneliness”